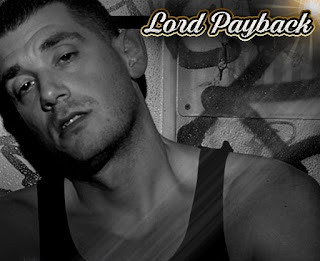 This week's feature is on LORD PAYBACK, a very business minded rap recording artist that's here to tell us more about his business, clothing line, give advice and more!  Read all about what he has to say and take note!

Business Minded:  How are you Lord Payback?
Lord Payback:  Another day filled with limitless opportunities and endless possibilities.....that means great...lol

Business Minded:  In a previous interview you revealed that you are an actual "Lord" and owning land in Europe, forgive us for  forgetting the exact location, however do you have any plans for the land and will it coincide with your plans as an artist?
Lord Payback:  Thats a bit exaggerated.  A friend of mine bought me a plot of land in Scotland where you are designated as a lord.  It is not worth big money....it will not affect my music career.  It would be cool one day to visit it.

Business Minded:  Speaking of plans, what plans do you have for 2018 as an artist?
Lord Payback: I will be dropping my new single; I will not be revealing the title of it until the release date is set. I will continue to grow my "Payback" clothing line and put out another mixtape all in early 2018. You can check out my apparel and music at www.lordpayback.com

Business Minded:  You have the Verbal Battery Vol. 2 mixtape out already, for those that haven't heard it yet, what can people expect to hear on this installment of the mixtape series?
Lord Payback:  The Verbal Battery mixtape series are aggressive and braggadocios.  I find some of the hottest industry beats mixed with original tracks and spit pure lava over them.  Most tracks and lyrics are violent by nature as you would expect from something entitled Verbal Battery.

Business Minded:  Nowadays in this industry artists have to wear many hats to become successful in the rap game, such as wearing the hat as a "businessman", would you consider yourself a businessman as well?
Lord Payback:  I am just as much a business man as an artist. I have my own record label entitled Prove A Point Records and publishing company Faith Filled Music. I have also secured a merchandising deal with Merch Direct for my apparel and a synchronization deal with Shelly Bay Music (had a song on the Movie Sisters under my former stage name).

Business Minded:  What is one of the best business moves you've made in your career ever?
Lord Payback:  Walking away from the associates I use to be around in the business. Even though big time deals were on the table none of it would have worked out in the long term. I would have had short term success and wound up with nothing.

Business Minded:  What would you say was one of your wises decisions in 2017 in terms of business?
Lord Payback:  Starting all over and rebranding my company.  It was an opportunity to wipe away the past and a second chance to do everything correctly.

Business Minded:  What advice would you give other artists coming into this business?
Lord Payback:  Be prepared to be ridiculed, mocked and any other word you can think of by people who are jealous of your talents. You will be told "No" countless times until you find that "yes". Have thick skin, stay positive and believe in your path and talents. The only thing stopping you is you. Right before your big break comes it will get harder....harder to the point that you feel like you can't take anymore.....see that as a positive....that's when you are very close. Put God first and enjoy the journey!!!

Business Minded:  What's the worst business move or set back you've experienced in your career and how did you bounce back from it, and what did you learn?
Lord Payback:  There were so many...lol....the worst decision I ever made was allowing stupid people to influence my decisions even though I knew they were full of shit. I didn't trust myself so I allowed them to take advantage of me.  I learned I am smarter than most people and to trust that feeling in my chest.  When something doesn't feel right it isn't right. It set me back but it was a blessing in disguise because it helped make me into the man I am today. I am smarter and tougher and now ready for the lords blessing to bestow upon my brow.

Business Minded:  What is your motto?
Lord Payback:  "Thou Shall Not Quit".